Self-Organization in the Evolution of Speech 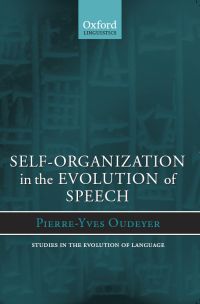 Here is my book on the role of self-organization in the evolution of speech. This book was written in french and translated by Jim Hurford.

* The first book to present a detailed computational model of the origins of complex speech sounds
* Unites insights from evolution, artificial intelligence, neuroscience, and speech science
* Presents an original view of the interactions between self-organization and natural selection
* Written in an accessible way with minimum recourse to jargon

Speech is the principal supporting medium of language. In this book Pierre-Yves Oudeyer considers how spoken language first emerged. He presents an original and integrated view of the interactions between self-organization and natural selection, reformulates questions about the origins of speech, and puts forward what at first sight appears to be a startling proposal – that speech can be spontaneously generated by the coupling of evolutionarily simple neural structures connecting perception and production. He explores this hypothesis by constructing a computational system to model the effects of linking auditory and vocal motor neural nets. He shows that a population of agents which used holistic and unarticulated vocalizations at the outset are inexorably led to a state in which their vocalizations have become discrete, combinatorial, and categorized in the same way by all group members. Furthermore, the simple syntactic rules that have emerged to regulate the combinations of sounds exhibit the fundamental properties of modern human speech systems.

James R. Hurford is Professor of Linguistics at the University of Edinburgh. His books include Semantics (with B. Heasley, 1983), Grammar (1994), and as co-editor Approaches to the Evolution of Language (1998), all published by CUP.